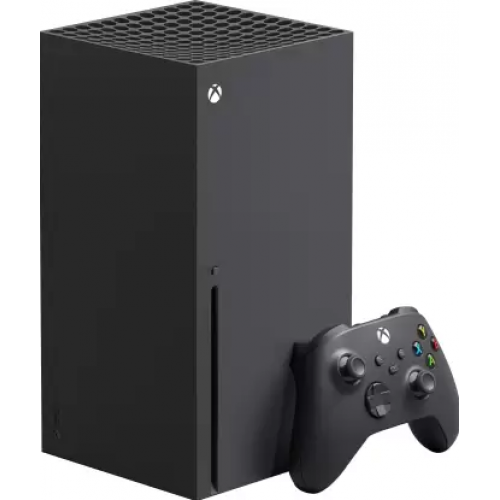 Advance to the next level of gaming experience with the powerful and high-speed Microsoft Xbox Series X. This gaming console features 12 Tera-flops of graphics processing power and the Xbox Velocity Architecture for high-speed, seamless gaming. Also, it comes with an Xbox Wireless Controller for hassle-free gaming, and it is compatible with Xbox One accessories.

Game ON
From future adventures, to current obsessions, to classic titles, thousands of favorites across four generations of Xbox look and play best on Xbox Series X.

12 Tflops of Power
The 12 teraflops of processing power housed in the system on a chip (SOC) work with AMD’s Zen 2 and RDNA 2 architectures to result in worlds that demand a closer look.

The Xbox Series X delivers sensationally smooth frame rates of up to 120FPS with the visual pop of HDR. Immerse yourself with sharper characters, brighter worlds and impossible details with true-to-life 4K.

From original classics like Halo: Combat Evolved to future favourites like Halo Infinite, every title looks and plays best on the Xbox Series X.

Engineered for Speed
Together, the new system on a chip (SOC) and the Xbox Velocity Architecture put speed at your fingertips, and the 1TB custom SSD & CPU put the wheel in your hands, so you can go from 0-60 in up to 120FPS.

Change the game. With Quick Resume, you can seamlessly switch between multiple different titles and resume instantly from where you left off.

Increased Inventory. Uncompromised Performance
The 1TB Seagate Storage Expansion Card for Xbox Series X|S plugs into the back of the console via the dedicated expansion port and replicates the console’s custom SSD experience, providing additional game storage at the same performance. (Sold separately.)

Elevate Your Game
Experience the modernised design of the Xbox Wireless Controller, featuring sculpted surfaces and refined geometry for enhanced comfort during gameplay. Stay on target with textured grip and a hybrid D-pad. Seamlessly capture and share content with a dedicated Share button. Quickly pair with, play on and switch between devices including Xbox Series S.